This is the first part in a bi-weekly ongoing series about Pokemon GO, where I will highlight new features and game-play mechanics in an continuous effort to explain why now is the best time to get back into playing this amazing game. Over the summer, Pokemon GO was a tidal wave of gaming adventure for most gamers, and a disappointment through server errors and glitches for many. As colder weather came and children returned to school; the game had time to breathe, the errors became less, and the updates and patches have improved game-play far beyond my expectations. Please read this week’s entry and the other entries in this series which will become available in the coming months.

Today Pokemon GO players woke up to a server update, which came as a surprise because 5 days ago was the most recent Pokemon Migration (to be discussed in a later entry).  The news broke shortly after that Pokemon GO will have its first time based event, starting on 10/26 and ending on 11/1. Naturally, given the timing, this event will be spooky themed based around the real life holidays of Halloween in the US and similar spooky holidays in other countries.

Since it was scheduled to begin on October 26th, I was plum surprised when I fired up Pokemon GO on my way home (on 10/25) from the gym to see the new loading screen! I dabbled through the newest features and was surprised at a couple things I’ve discovered over the next hour of game-play. 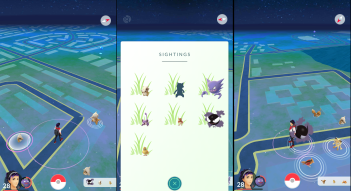 It was announced that Ghost type Pokemon would have a larger presence when they announced the event this morning.  I was surprised to find the chances of encountering Gastly and Haunter have skyrocketed. Not only that, but Dark Type Pokemon also have a larger presence. In one hour’s time, I have found a lot of Rattata, Meowth, Gastly, Haunter, Drowzee, Hypno, Zubat, Golbat, Cubone and Marowak. Bonus points to Niantic for recognizing Cubone and Marowak in the Pokemon Tower storyline.

TREATS: Double the Candy (and more for buddies) 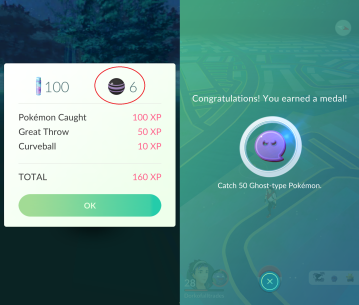 Normally for every Pokemon you catch, you get 3 candies to help power that pokemon or evolve it. Likewise during normal game-play, you get 1 candy for transferring or evolving a Pokemon, and X number (varies on egg type and chance) of pokemon candy for hatching eggs. During this event, you will find every candy  you normally get for these activities is doubled, which means 6 candies for catching a new Pokemon, 2 for transfers, 2 for evolving, and 2x candy for hatching eggs. Now is the time for catching all you can and every lucky egg trick (to be discussed in a later entry). Saving the best treat for last however is found in the buddy system. 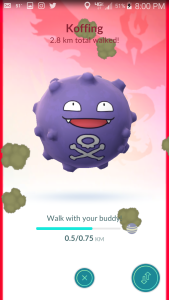 The Buddy system was added last month and allows you to walk with pokemon so that they normally will find candies every 1km, 3km, or 5km; depending on their egg group. This Halloween event cuts the amount of distance traveled for each egg group by 4; so for every 1km egg you only have to walk ¼km, 3km is reduced to ¾km, and for 5km eggs you only need to walk 1 1/4km.

I didn’t intend to start this blog series until November, but this event had forced my hand. I truly love playing this game a few hours each week and this week long event has really livened up that experience. In a few short hours I was able to catch enough Cubone for 2 Marowak evolutions and went from 10 gastly candy to 150 gastly candy. Halloween is one of my favorite holidays, and now Pokemon GO is fueling that passion because my two favorite Pokemon are Cubone and Haunter. Happy hunting everyone, tune in next week for more Pokemon GO tips and tricks!