Well hello internet, my name is John.  I am twenty three years old, and from Philadelphia.

Well my first thought would be to find a definition of a podcast for you, Wikipedia defines it as digital medium consisting of an episodic series of audio, video, PDF, or ePub files subscribed to and downloaded through web syndication or streamed online to a computer or mobile device. I would define it as a way to broadcast your raw opinion and let it out into the ether, and my history with that has spanned most of my life.

Since I was a wee lad (as my grandmother would say) I have been fascinated with talk radio, a big proponent of that back then was the Preston and Steve morning show on FM 100.3 in Philly. I listened to that show throughout my childhood until it was cancelled in February 2005.

That wasn’t the end of that radio show, in May 2005, after a short legal battle they resurfaced on 93.3 WMMR, and have been there ever since. But in that hiatus I lost interest in radio and went off to do high school stuff; soccer, chase women, steal cars, etc. After I graduated I found I had time to kill while working the menial job of pumping gas at a local gas station. I found the show again on iTunes and became an instant fan.

For years, I listened to the 4 hour long show (five days a week) on my commute to and from my college, work, and vacations. Preston and Steve kept me laughing for years, but in that time they had Kevin Smith, a famous director and known podcaster, on their show. I grew up in the nineties and heard of Jay and Silent Bob and was familiar with all of Kevin Smith’s films. I even snuck into Clerks II since it was a hard R and I was underage, sorry Kev. Anyway he was promoting Red State and asked the listener to check out his podcast at Smodcast. At the time I was a pizza delivery driver and exhausting through the back log of P&S episodes, so I thought why not check out the Smodcast. 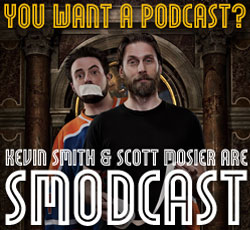 I was amazed what he could say on his own show that a FCC regulated show could not. Smodcast had an explicit tag on iTunes and boy did they fulfill that promise. The first episode I heard was about sharks, and a WW2 vet who survived a submarine crash and escaped Greece. I began to expand my repertoire of Podcasts I listened to throughout the SmodCo network. After a year I made the leap from FEAB, starring Scott Mosier (originally from Smodcast) and Matt Mira to another show Matt was on called the Nerdist.

The Nerdist with Chris Hardwick opened me up to awesome interviews with people I adored, and through his hard work came Nerdist Industries.  Nerdist Industries opened up a whole new world of podcasts I could listen to. And in the past three years I have listened to over 60 unique podcasts. All of which beg the question, why not me? I am a fan of comedy, and of podcasts, but why should I be heard from mountain tops? Am I that vain? Yes I am.

Kevin Smith, my podcast guru, urged his fans in the last year to record at least one podcast in the coming year, and the Dork of All Trades is my attempt. Kevin has this theory that all human beings need is food, fucking and to be heard, and I feel it’s time the universe hears what me and my friends have to say.  So here we go; Tim, myself and sometimes Brandon are going to try and take you, the listener, on a journey of nostalgia, fandoms, and weirdness. We hope you enjoy.